Disclaimer: I have never seen The Bucket List. But it’s about two guys who are going to die so they do a bunch of things that they have always wanted to do before the kick the bucket. Apparently they are quite different; I imagine they go on all sorts of adventures and shenanigans, while one eventually dies, the other one tears up about losing his new friend, dies of a broken heart and a red fern grows between their graves. Anyway, the bucket list… 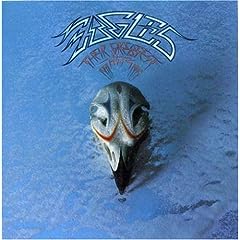 At or near the top of my bucket list since about 1995 has been to go see an Eagles concert with my dad. Well, a few months back I realized they were going to be in Atlanta shortly after Gabe was born, so I quick called my dad up and said, “Hey, you want to come out in May and meet Gabe and see the Eagles?” He said yes and I purchased tickets roughly 2 minutes later. Last night we took off for the new Verizon Wireless Amphiteatre in Atlanta and after finding our way through an unexpected detour because of traffic, we finally made it to the parking lot and took the shuttle over to the Amphitheatre. Now, it was just time to wait for them to start.

The Eagles are currently out touring in support of their new CD Long Road Out of Eden (available exclusively at Walmart) and they opened with their first single from that album, “How Long.” They pushed through a couple other new songs from LROOE and then a fantasticly haunting trumpet solo went on for a few minutes. As the sound slowly faded, there it was–the most distinct B-minor chord in musical history–“Hotel California.” The crowd, which had been going nuts since the lights darkened right before the concert started, went crazy. Glenn Frey dedicated “Lyin’ Eyes” to his first wife, also known as “Plaintiff.” They went through and nailed a bunch more classics and took a brief intermission.

After intermission they planted themselves on the front of the stage on stools a la Hell Freezes Over and went through a few more new songs. They started with their tight harmonies on the new “No More Walks in the Wood” and though I would have preferred “Seven Bridges Road” to highlight their vocal maneuvering, it was impressive nonetheless. They mixed in some old songs, some new ones, and some from both Don Henley and Joe Walsh’s solo careers. They ended with “Life in the Fast Lane” and then came out for two encores before the night was over.

It was amazing. These guys can still bring it. I couldn’t believe Joe Walsh’s fingers could still move that fast (or that he could remember the songs). I couldn’t believe Don Henley could still hit those notes. I couldn’t believe how well guitar player Steuart Smith fills Don Felder’s shoes. It was a blast. Dad and I sang along to all the songs (quietly to ourselves, unlike the folks behind us who were determined to hit every note that Don Henley did. It sounded like cats in heat). Best concert ever? I think so…I think I was just in disbelief that I was sitting there on the lawn with Dad listening to the Eagles play for 3 hours. If ever they should return, I will be there. With Renee, as she was incredibly jealous of us both. We tried not to rub it in too hard. Actually, we didn’t try hard at all. But she’s a good sport.

Oh, just an FYI. Running a marathon is also on my bucket list. I hope to get back on my running routine this week after a couple weeks off.