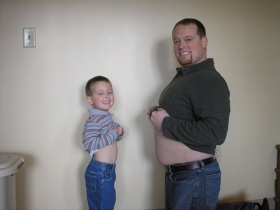 So, it’s been quite a while since I’ve updated y’all on what’s going on, and given that Renee is less than three weeks from her due date, I find that several of you are getting a little bit testy. In fact, just today my boss was telling me that she reads her RD’s blogs when procrastinating and I have not been providing good distractions. At least that’s how I remember what happened. Anyway, here’s what’s been going on the last few weeks.

As far as the pregnancy goes, Renee is moving along just fine. We had another ultrasound a few weeks back-I’ve added the pictures to the Ultrasound gallery. She’s 37 3/7 weeks along and the doctor says she can go really anytime now. Everything that needs to be soft is soft and everything that needs to tip is tipped. She’s been at 1cm for the past couple weeks and she’s ready to get going. The baby has dropped some, so she’s pretty uncomfortable and gets up to pee at least 3 times a night. But she’s a trooper and is into a hyper-nesting phase. Everything in the house is clean, it seems like the laundry gets done every other day and she when she sits down to rest she’s antsy to start doing something else. They say once the baby drops and the extreme nesting phase kicks in it could be only a few more days, so we may meet Baby Brother soon! Renee also got her hair cut yesterday. Let’s just say I wasn’t expecting it to be as short as it was and didn’t have a reaction appropriate for a pregnant woman you’ve been married 6 years to. There were tears. The lesson, as always, I am an idiot.

Things at work have been pretty busy for me and will only get busier these next few weeks. Now that RA’s have been hired for next year we have a leadership conference this weekend, we’ve just kicked off the housing scramble (also known as “Get Your Feelings Hurt 2008”), we’re interviewing candidates for open RD and ARD positions and at some point we’ll be having a baby. I sat down and figured out that April 12th would be the best day for that. It’s on the schedule. 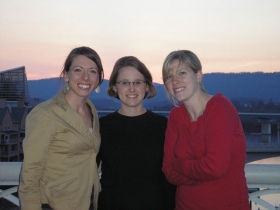 We also had a great time a few weeks back when Priscilla and Eric Peters came down to visit. Renee met Priscilla the summer she spent at Focus on the Family Institute and the two of them and Kelli Owens (who moved to Chattanooga last fall) have remained close friends. Priscilla and Eric were married in Cincinnati this summer and it was great spending time with them.

And the little rugrat is doing good too. He’s been in a better mood lately-he seems to go in phases these days. He had fun on Easter doing an Egg hunt here at home. Then he got to go to the Aquarium the next day because he had 10 gold sticks. Too hard to explain right now, but he gets a gold stick each day for being a good boy and helping do chores. Once he gets 10 he gets a special treat-it may be a new matchbox car, or a trip to the mall play place, or to the Aquarium to see the fishies. 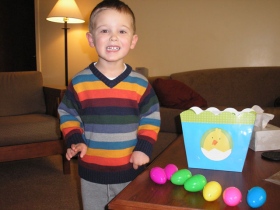 He’s also been making us laugh with some of the things he says. A few of the best are below:

When giving me a kiss on the cheek when I haven’t shaved in a few days: Ouch! Your face is crunchy.

We were taking his shirt off and putting his PJ’s on and Jonathan wondered what the two spots on his chest where. After being told they were nipples, it was time for bed and we were tucking him in. He said he wanted to feel my face to see if it was crunchy, and then followed with: I want to feel your nibbles.

And: You have big nibbles, Daddy.

Yeah, Renee and I lost it (I didn’t actually let him feel them). More belly pictures here and some recent pictures from March here.

One thought on “Getting Close…”