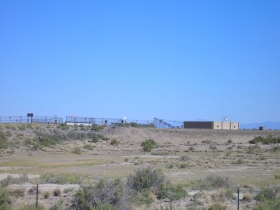 Is that a prison you ask? Oh, no, it’s the entrance to San Luis Lake State Park near Alamosa where we spent our first camping trip with a 1 year old. We had traveled down there just outside of Great Sand Dunes National Park to spend 4 days tent camping and to knock off another National Park while we live in Colorado. Let’s just say we were a little dissapointed in our State Park. It’s like they thought, “Hey, let’s make a state park right outside the Sand Dunes to have an overflow camping site, even though there is nothing remotely beautiful about this spot.” Anyway…

So, a couple hours before we left, Jonathan was playing with the cooler and slipped and fell and hit his mouth on it, cried, held his breath and had another seizure. This one only lasted about a minute and half, but he was pretty inconsolable for a couple hours afterwards. The doctor thinks we should have him see a pediatric neurologist just to make sure everything is okay, but feels like it won’t be a big deal. So after lunch we finally headed down for our trip. 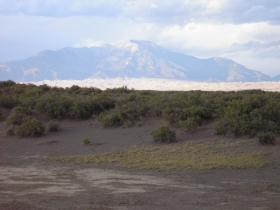 The first night we were at the state park was very windy. We were in our tent and Jonathan was in his Pack ‘n Play and at about midnight he started whining. It was about 40? out and he was cold, so we brought him into bed with us. So he slept great and we did not. We woke up at 6:00 and our day was started. After eating breakfast and getting clean, we headed over to the Sand Dunes.

The Sand Dunes themselves where pretty cool. It’s amazing to see this huge beach in the middle of nowhere up against the mountains. They were really quite beautiful. We didn’t hike to the top with Jonathan, but we ventured out a little bit. It was cool, but it wasn’t like there was a ton of stuff to do. I mean there’s the Sand Dunes, and that’s about it. 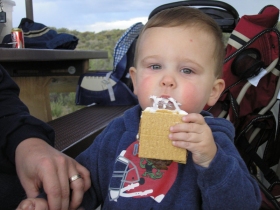 There were some trails in the mountains near there, but we needed to get back to try and get a nap for Jonathan. It didn’t really happen…to hot this time. So we hung out around our fabulous campsite and Jonathan played with the rocks. We grilled out later in the intermittent rain and then Jonathan had his first S’more. I think he liked it. It was really cold again that night, so we decided to pack up in the morning and head home early. 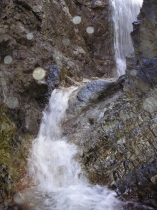 We went back to the Dunes in the morning, and then headed over to a place called Zapata Falls. We drove up the mountain a few miles and then got out to hike up the trail. We got to the river and had to hike through that to get to the falls. They were gorgeous, and we had a great time there. It was actually worth the whole trip, so if you are ever heading down that way, two pieces of advice: First, go see Zapata Falls and hang out there. Second, for the love of God and everything holy, please reserve a campsite early in the National Park and stay FAR FAR AWAY from San Luis State Park. Some more of our pictures from the trip are right here.