Our Midwest Christmas tour is over, we’re back to the mountain in Georgia, and except for the occasional outbursts and singing of an almost-three-year-old, the college is quiet. Students don’t return until the 4th and classes resume on the 8th.

Except for the Packers losing to the Bears (and indirectly causing me to lose my Fantasy Football Championship to Renee’s brother, Jon), we had quite the enjoyable visit home. It was the first time we had been home over the holidays since we have been married and it was refreshing to be with family and friends, and, yes, even enjoy the cold and snow.

We made the 12 hour drive up to Grand Rapids on the 18th and Jonathan was a rock star thanks to the 8 DVD’s we brought with. Renee’s cousin Tracy and her husband Dan came over one night, and it was great to spend some time with them–unfortunately we couldn’t see Kelly as her flight was delayed from Chicago. We were able spend quite a bit of time with Aunt Tawni and Uncle Jon and Jonathan had fun outside with Papa Jerry in the snow. 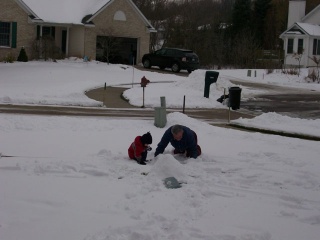 We left Michigan on the 23rd looking like Jed Clampett with all of the stuff tied on top of our car-we had to pick up baby clothes that were in storage. We traveled through 70 mph gusting winds and freezing temperatures through Chicago and were able to grab lunch with our great friends Lief and Emily north of Kenosha as they were only a few miles behind us on the highway after their flight getting canceled in Denver. We then made it through the blizzard up to Nanny Linda’s house for a Christmas party with all of Jonathan’s cousins. Great idea by Nanny to get out the instruments too…my ears are still ringing. Christmas Eve we stopped over to see our dear friends Kyle and Megan and Chris and Lara. Chris moved to Boulder a month after we left Denver and Megan lives 4 hours a way in Johnson City, TN. Naturally we decided to meet in Fond du Lac, WI. Then Papa Phil, Aunt Titi, Uncle Josh and the three of us headed up to West Bend to hang out with the Litscher family, and Jonathan had Auntie Char wrapped around his little finger. After we returned, Renee spent most of the night on or in front of the toilet (I think we scared Santa away with the awful sounds coming from the bathroom). Christmas was back at Nanny Linda’s with Papa Steve and Papa Phil and a big turkey and the 26th we just relaxed and had Phil’s famous Ribs and Fish for dinner. We left the morning of the 27th to head back and made it back up the mountain around 10:45 that night.

It was a great visit home and a much needed break. Pictures from our Michigan leg of the trip are here. I’ll try to get some more up soon, as well as a comparison picture of how Renee is growing now and with Jonathan. Hope all of your Christmas’ were joyful and restful!

One thought on “Happy New Year!”